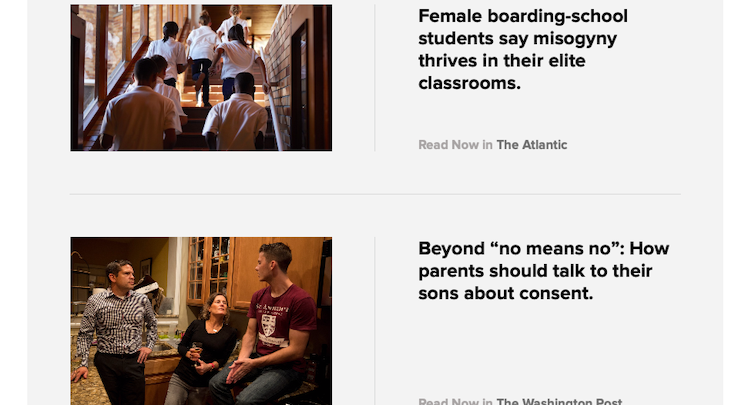 Apple News desktop app is very good. It automatically finds newspaper and magazine subscriptions and imports them into the app. The “Evening Digest” is excellent. It’s a mix of things I’d traditionally read and a lot of stuff that I wouldn’t; great curation.

I’m looking forward to seeing whether the curation of news pieces is based on AI, human curation, or popularity with others. Given Silicon Valley has traditionally struggled with News curation and generation, I’m keen to see how Apple fares in potentially being a gateway for credible news. Apple has hired Laura Kern, previously of the New York Times Magazine, to be the inaugural editor-in-chief of Apple News. There are many reports that Apple is meeting with major publishers in an effort to build a monetisation and audience reach model. Will it be “All You Can Eat”, where Apple Subscribers get a mix of news, movies and music? Will it be a “News” subscription model?

Given Facebook’s media woes, one important role that Apple News should/will play is the delivery of quality journalism – something sorely needed in the era of “fake news” and “citizen journalism” – or as I call much of it: “loser-generated content”. It’s important that Apple delivers rather than curates. There’s a subtle but important difference. Curation brings with it editorial direction, cultural baggage and editorial biases (conscious or unconscious). Delivery simply looks for scale and ability to deliver and allows people to decide what to consume. Facebook did the former. Apple seems to be doing the latter.

I’d suggest Apple will be looking to partner with publishers to help them explode out their content across a variety of formats and channels. Most publishers still haven’t transcended the content formats that they were born on. TV networks will favour video. News outlets still favour text. Radio networks favour audio formats. Apple has strong channels in all of the above: iTunes, Music, Podcasting, Apple TV, iPhone, iPad and Desktop – channels that cover all of Text, Audio, Video, Images and Software. By partnering with these publishers, it encourages them to create content across all formats and outsource the monetisation to Apple. Maybe.

Whatever happens, it’s a solid platform that looks like it will be seeing a lot more time and attention from Apple.